I have just returned from Universidade de Sao Paulo, where I attended the [2º High Performance Computing Workshop](http://2whpc.lcca.usp.br/). Unfortunately I couldn't go in the morning, so I missed the first half of the event. From what I read in the schedule, in the morning USP and Rice University explained what was the current situation of the cooperation agreement - that is mainly about Rice's IBM Bluegene/P being used by USP.

My main reason to attend this event was to watch Professor Dr. João Carlos Setubal’s talk on HPC and Bioinformatics. His talk was great, but I’ll add a full report here, with all the talks that I watched (you can skip to his talk if you prefer).

The first talk was by Phd. Denis Tanigushi. He gave a great talk about GPU computing. He started with a history background, that was coincidentally similar to a recent Hacker News thread about shaders. He then exposed the problem, GPU architecture and its application in HPC. What was very interesting was that he used several GPUs and MPI too - I didn’t know it was possible. 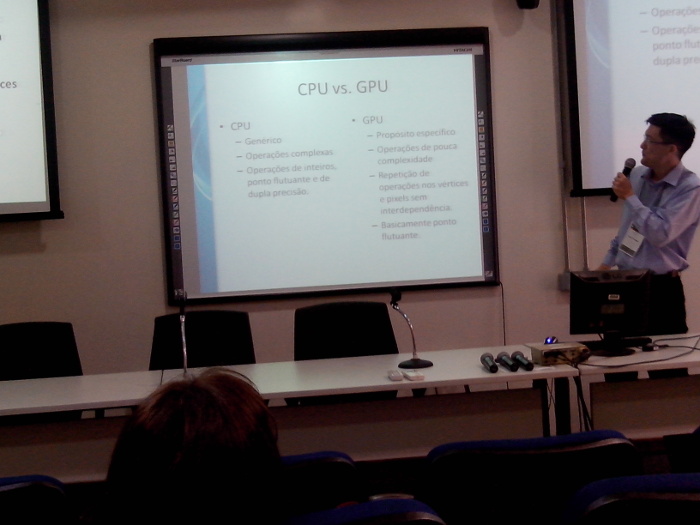 I learned about Warps, and when/how to use GPU. Here are some of the software that appeared in Tanigushi’s talk: Matlab, NVidia libraries, Ansys and Gromacs. Oh, he also mentioned C thrust library and functors.

The next part of the event was very interesting too. It was a series of 4 lighting talks, the first one being the HPC and bioinformatics that I wanted to see. Prof. Setubal gave an excellent talk. He talked about his work with Genomics and Transcriptomics. He also mentioned that his work is of collaboration with other groups and Project Driven. Ah, and that it is also Big Data Driven. 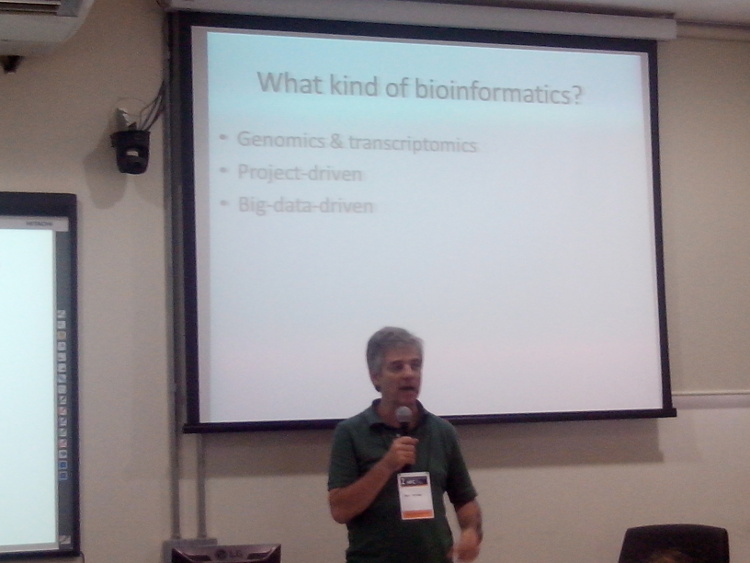 He used Blast, MPI-Blast, SOAP Denovo and Abyss for his analysis. And found out that Abyss didn’t work well in Bluegene, but on the other hand, using MPI-Blast he was able to reduce the processing time from 2 months to 3 days only the time to blast his dataset.

He concluded his talk saying that most of his tools are made by other groups, but not always made to run in parallel. And that it almost always produces a pipeline to run everything. From what I could understand asking him later, his group doesn’t use any kind of pipeline tool - no Galaxy, Taverna, Mobyle, nor Jenkins (cough cough)

The rest of the event

The next speakers were two members of the IT school, presenting their work and team, that helps groups fine tuning their clusters. Unfortunately I couldn’t ask them whether they share their data (like cluster monitoring results, and compiler flags).

The last lighting talk before coffee break was Prof. Dr. Attílio Cucchieri. This talk was awesome too. It was about atoms, quarks, molecule. All those names that you hear in The Big Bang Theory. Prof. Cucchieri really knows what he is talking about. His talk was interesting, with many examples and real cases of use of the Bluegene supercomputer. I felt like I could like learning more about what he was talking about. 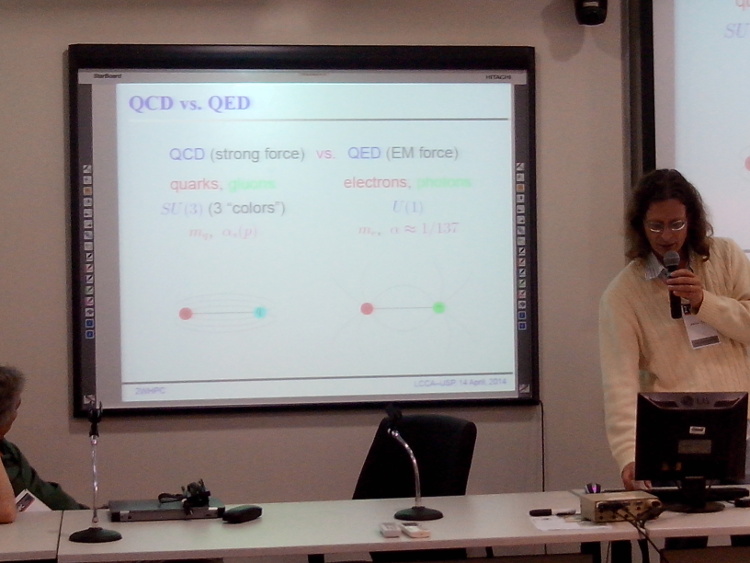 Finally, after the coffee break we had four more lighting talks. The first one was by the young Dr. Ricardo O. S. Soares, about dengue, molecules, proteins and many amazing videos, animations and illustrations. Looks like he uses a lot of GPU for processing his data. 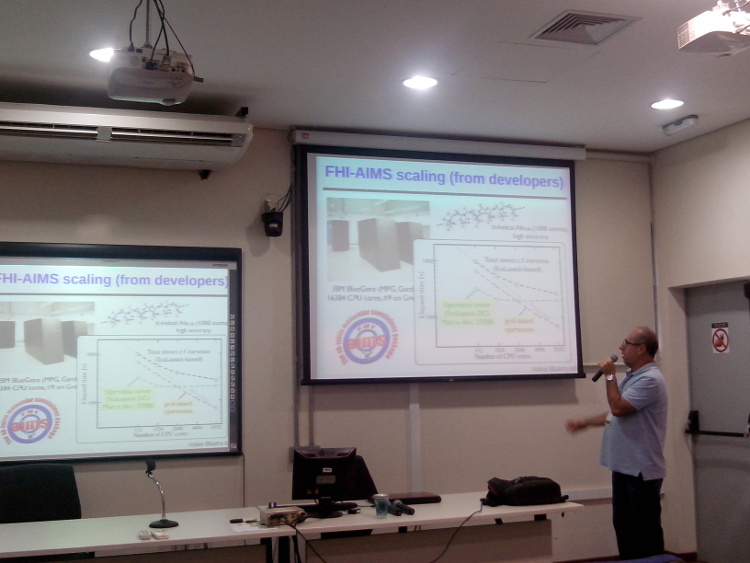 Last but not least, Prof. Dr. Leonardo Matheus Marion Jorge, presenting the works of his groups with molecules and, yup, more amazing illustrations. Not sure who was younger, Prof. Leonardo or Dr. Ricardo, but both were amazing.

What I liked about the event

The event atmosphere was great. The auditorium too, as well as the quality of the talks and the coffee break (nham nham). I learned more about what USP has to offer to its students, researchers and collaborators, as well as a bit more about which bioinformatics tools they are using.

Ah! And the event was transmitted to the Internet too, and the organizers took
care to not let people ask questions without using the mic.

What I didn’t like so much about the event

I really enjoyed the event! But one thing bugged me.

Most of the talks that I watched mentioned some Open Source software. The university has a group dedicated to Open Source, but there was no word about sharing data from the HPC servers (monitoring, patches, or enhancements) back with these projects, sending contributions or even donations. Maybe there is some contribution happening, but I couldn’t find anything about it.

I was expecting to leave the event with some GitHub repos to follow, but unfortunately the speakers didn’t provided any link too.